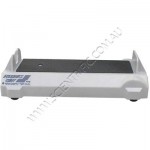 The IEC Dynamics Cart can be loaded with bricks or other weights to change its mass.
Two or three carts can be stacked.
A cart can be towed along with cords or with rubber bands to simulate constant forces being applied.
Velcro pads lock two carts together after an inelastic collision.

Supplied as pairs, these are the same carts as MF0945-001 but without the firing pin which is used for recoil and similar experiments.