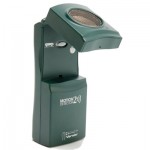 VERNIER MOTION DETECTOR
For use in: Physics, Physical Science.
The Motion Detector functions like the automatic range finder on a Polaroid camera. This sonar device emits ultrasonic pulses and waits for an echo. The time it takes for the reflected pulses to return is used to calculate distance, velocity and acceleration. The range is 0.4 to 6 meters. Our Motion Detector has a pivoting head, rubber feet and a clamp for mounting. In addition, the cable is removable, so you can convert the Motion Detector for use on a different lab interface by using the relevant cable.